Firstly happy new year to all our customers and again thankyou for your support over the last 12 months. I think we were all hoping that the sounding of the bell for the new year would bring a very different year ahead but sadly it seems its just more of the same, “unsettled weather”.

The real issue though is the Corona virus that I think will be around for a little while yet regardless of any vaccine’s and just something we need to adapt around. One of those adaptations has been the re-introduction of masks indoor and reduction of gathering sizes, and anything else that changes between me writing this and you reading it. With masks or any restrictions placed on business is not something we introduce ourselves but regulations we must follow, and we ask that you respect that and respect other customers in our shop, this goes for visitors and locals. Excuses like “you know me” “I’m local so ok” “I will only be a minute” “there is no ones else in the shop” or just plain refusal, “what are you going to kick me out and loose a sale” none of these really cut it and show very little respect for my business and staff. We don’t like wearing masks as much as the next guy and go home every night exhausted from trying to talk through them all day, but what we would like even more is to have to close the shop because of a lack of respect from customers. I feel for those with genuine reasons for not wearing a mask as they would get questioned all the time and it probably wears a little thin but again don’t take it out on the person behind the counter, trying wearing a lanyard around you neck similar to some of our deaf customers do with a simple message, might save a few questions. If you have a real problem with the masks give us a call and we can get your bait or tackle needs ready and serve you at the door or simply come to the shop give us a yell and stay outside and we can bring your tackle to you.

Back to the weather and what the hell is going on? I don’t think anybody knows or has any chance of even guessing. It’s been that inconsistent lately even my barometer has given up and seems confused. I have written it 100 times, it’s a season of opportunity, and that continues with people simply watching the weather and when the weather is right heading out, planning for a one to a five hour fish and just taking what the weather gods allow. The only pattern over the last couple of weeks has been those out early have done the best, both on the fish but also with the carpark at the boat ramp. This is normally the case over the holiday period with the extra traffic during the day sending the fish into their hiding spots. It generally then fires up in the late afternoon/evening but the winds have put an end to most days. Land based has produced a few good catches, despite there being very few people on the jetties at times there were a lot of people fishing off the beaches. There has also been an odd opportunity for a quick fish offshore providing a couple of customers with a few feeds in the freezer.

Holiday time always brings an influx of reports from the jetties, especially from the kids visiting from other areas. We have had several reports of whiting from San Remo jetty this week and while no monsters were caught off the jetties there was some quality whiting off the beaches and some good numbers also, the same for the boats with some very respectable bags of quality size. There was a couple of reports of whiting from Newhaven jetty also and the change of the low tide was better there. Other land based whiting spots were low tide at Sunderland bay, the beach near the old boys home in Newhaven and Ventnor beach. Paternoster rig, size 4 hook and a cocktail of bait with squid and pippie was the most successful combinations. Whiting from the boats started off Christmas with a rush but as the traffic got heavier the whiting go a little harder to find. From the reports, we found as the week went on the whiting got deeper. They were still caught in the deep early in the week but just disappeared from the shallow. Those who still caught them in the shallows were on the water as the sun came up and heading home when everyone was heading out. if you are going to look for the whiting in deeper water you will need to change you gear slightly, hooks can stay the same but sinkers definitely need to be heavier, leader on the top end of what you would use for whiting and baits, try using squid or pilchards, even in cocktail with pippie.

Calamari was the other species caught in numbers off the land and 3 places made up almost all the reports. San Remo jetty, Cleeland bight beach and Ventnor beach produced plenty and caught on a combination of artificial and baited jigs with neither standing out. There was a lot of calamari caught on white jigs, probably because every second person is using one, most other colours also produced. Boating a kayaks didn’t have any problem finding the calamari if they went the right times of the day, very early and in the evenings. Those who fished during the middle of the day managed a few but found the calamari very flighty, chasing jigs to the boat but not attacking them.

While there hasn’t been too many opportunities to head offshore over the last couple of weeks there has been small windows and the signs are promising. Gummies, bluefin, kingfish, flathead, snapper, salmon, school sharks and Mako sharks plus plenty of bait fish some of the species we have had reported over the last couple of weeks. No real sign of the arrow squid yet but most customers I have asked are fishing on the top for them. I would suggest that if you do head out drop a squid jig right to the bottom as that’s where we have found them at this time of the year.  Paternoster rig, we use one of those wire surf rigs a couple of bright coloured jigs, not the $30 ones, couta love them or baited jig and a very heavy sinker. An old rod that has been broken off at the end works perfectly with that old reel just sitting in the cupboard, drop the rig to the bottom give it a wind and just let it bounce around as you drift along.

On a really positive note, I wanted to share a couple of  pictures and associated stories 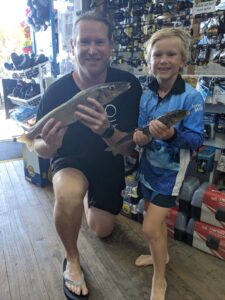 Brad fished in Cleeland bight with his son Sam on Sunday and were rewarded with a bag of whiting that contained a fish of a lifetime, 54cm 1.12kg, who needs a boat to catch quality! 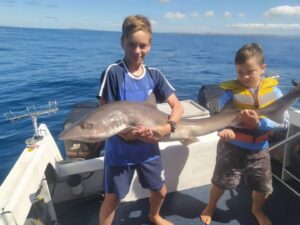